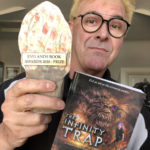 In fact, ‘The Infinity Trap’ reminded me most of another giant of science fiction for children, Andre Norton. There’s a classic-in a positive sense-feel about the book, a belief that this is the solid, imaginative, ‘real’, science fiction I would have read in one sitting as a child.
Stuart Douglas, the British Fantasy Society
To read the British Fantasy Society’s review click here.

The Infinity Trap is what happens when Ender’s Game, Harry Potter, Star Wars and Grange Hill are popped in a Tardis and shaken about a bit to create a wonderful, gripping could-be-the-end-of-the-world tale for those reluctant boy readers. With strange languages, bots and prophecies, The Infinity Trap is the story of Zeke, who has cheated on his entrance exam in order to get himself to Chasm, an elite off-world school for psychics, where he hopes to pick up the trace of his missing father. But something more sinister than the usual school bullying is going on at Chasm and when the school’s youngest student, Pin-mei, is kidnapped, Zeke must abandon his quest and set out to find the creature who took his friend. After all, the future of the universe could be at stake. But in a school where everyone has a psychic skill, it’s a tall order. Terrific dialogue, some wonderful technology and edge-of-your-seat plotting, makes The Infinity Trap the perfect book to drag middle graders and younger teens away from the screen and into reading.
Taken from author and bloggist Lee Murray’s blog site.

Bought this for my 11 year old daughter. She cannot put it down. Anything that catches a child’s imagination is a good thing in my view! The characters are brilliant, the plot is well structured, the setting believable. Ian Douglas writes from the heart and captures the angst and uncertainty of a teen caught up in a situation too big for them. My daughter loved the book, I adored it, even my 14 year old son has prised himself away from the games console to read a few chapters. It’s fair to say we’re hooked!”
Taken from the Amazon reviews here.

Ian Douglas’s science fiction adventure sees its hero, the blue haired Zeke Hailey, con his way into a school for psychics on Mars in the 23rd century. His father has disappeared in mysterious circumstances, and Zeke is on the trail, willing to fib his way through the entrance exams of the school to get some answers. On the way he falls foul of a nefarious academic searching for a terrible weapon on the Red Planet, butts heads with the de rigueur set of school bullies, and finds he is the only hope of rescuing a kidnapped classmate. It all crashes along at a fair old clip, and youngsters will find much to enjoy in this zippy adventure.
Robin Lewis, Left Lion Magazine

5 out of 5 stars: Gripping Young Adult Sci-Fi  I am not usually a great fan of Sci-Fi books, but having finished this gripping young adult book, I have changed my mind about reading Sci-Fi if it’s all as absorbing as this. Zeke Hailey, our fourteen-year-old psychic hero, while searching across Space for his missing father, undergoes perilous adventures in this fast-moving page turner. Mr Douglas has an remarkable perception of young people, his characters are very convincing, and his imaginative detailing of life on Mars, is nothing short of brilliant. If you like Sci-Fi I am sure you will love this series, no matter what your age. I just need to catch up on the earlier volumes, before going on to ‘The Paradox War’ which is due out soon and will be last in the series.
Taken from the Amazon reviews here.

4.0 out of 5 starsSci-Fi Magic at Martian Hogwarts
I’m really enjoying Zeke Hailey’s adventures in Ian Charles Douglas Martian twist on Hogwarts. Fantastic landscapes and monsters, great cast of characters, a satisfying emotional arc and lashings of peril. Very much admiring how well it is pitched to its genre and audience. Hurry up and bring on volume three, Mr Douglas!
Taken from the Amazon reviews here.

4.0 out of 5 stars A worthy follow up
We travel back to Mars and meet old friends and are treated to some new ones – teachers, pupils and residents of mars ( not to mention the rat on the cover). This book is a true sequel in that it follows on from the first a bit like a soap opera, so make sure you read The Infinity Trap first. We get to see a lot more of mars this time round and spend less time in school. Mr Douglas is clearly sowing seeds for the future. Can’t wait for The Particle Beast.
Taken from the Amazon reviews here.

Couldn’t put it down! This book was great. I really enjoyed the description of Mars. There were a lot of interesting sci-fi ideas, which seemed pretty believable to me. The pace was great, and I felt like the book built up the tension right to the end. This series is shaping up to be pretty awesome. 🙂
Taken from the Amazon reviews here.

The Particle Beast continues in the same vein as the previous two, offering a fast paced and fun adventure complete with pan-dimensional nasties, a a short tempered Irish android, and teens charging around with psychic powers like well-meaning chimps with machine guns. While this one starts a little less steady as it picks up the threads of the previous two, it quickly comes together and finishes the strongest of the three. In addition to fleshing out and developing the characters a lot more, The Particle Beast reveals more of the dark underbelly of the Mariners’ Institute, setting things up for a great fourth book and hinting that our reigning champs will need to do a lot more than be good a splatting beasties from here on out.
Taken from the Amazon reviews here.

Loved this book, and the 13 year old boys I teach loved it too.
Taken from the Amazon reviews here.

The Infinity Trap is available in print and most e-book formats and on sale at Waterstones, Amazon, and online book stores.